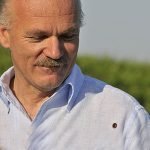 Rebel and curious since his early youth, at the age of 15, against his father’s will, he vinified his first Arneis that was dry, unlike the sweet one produced by his family.

378 litres of wine fermented in 54-liter demijohns in the garage, because it was colder than the cellar.
This was the first step in the creation of something that, at the beginning, looked more like an adolescent challenge then a real project.

After the Oenological School in Alba, he started to work with his father. After some years, his younger brother Massimo decided to join him in this adventure.